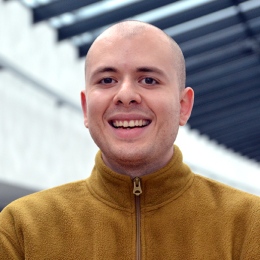 I’m a cosmologist who started a Dunlap Fellowship at the University of Toronto at the end of 2020. Before that, I was a postdoctoral fellow at the Oskar Klein Centre for Cosmoparticle Physics at Stockholm University. I defended my PhD thesis (A clear view of the primordial Universe) at University College London, after obtaining my Master’s degree at the University of Oxford.

My research focuses on understanding fundamental physics in the cosmological model – and developing robust statistical and machine learning models and methods to improve parameter inference. In particular, I have worked on tests of dark matter models (ultra-light axions, light dark matter) using cosmological data. I study both the cosmic microwave background (CMB) – the oldest light in the Universe – and the large-scale structure, in particular, the Lyman-alpha forest, the neutral hydrogen absorption in quasar spectra from the early Universe. I work at the intersection of data, theory, simulations and analysis methods, for example, with cosmological emulators and wavelet decomposition.

Above, you can find links to my publications list on the arXiv, to my curriculum vitae, to an outreach article I wrote about some of my research: A clear view of the primordial Universe, to a website collating astrophysical limits on dark matter, and to clean maps of the CMB that I created using a novel component separation method.

Below, you can find out more about some of my research.

I used the Lyman-alpha forest to place a strong bound on the canonical mass range for ultra-light axions to be the dark matter (ULADM; “fuzzy dark matter”). The mass range of 10-22 eV to 10-21 eV, motivated by the string axiverse and solutions to possible tensions in the cold dark matter model, is heavily disfavoured in our study. The study looked for the characteristic cut-off in the matter power spectrum associated with ULADM as traced by the Lyman-alpha forest. Its non-detection placed a 95% credibility upper limit on the axion mass at 2 x 10-20 eV. I am also in collaborations using CMB and galaxy data to look for mixed axion dark matter as suggested by the string axiverse.

Direct detection of dark matter using nuclear recoil is limited to dark matter particles heavier than about a GeV. But, cosmological data can set strong bounds on lighter, sub-GeV dark matter by looking for the imprint of dark matter - baryon collisions in the early Universe. I lead a study that set the strongest bounds to-date on this well-motivated model space.

In order to use the Lyman-alpha forest to test the nature of the dark matter, it is necessary to construct a statistically-robust way to use computationally-expensive hydrodynamical simulations. In order to do this, I constructed a general framework for dark matter model bounds. This includes a Bayesian-optimised emulator for the Lyman-alpha forest flux power spectrum as a function of the scale and shape of the power spectrum cut-off and nuisance astrophysical and cosmological parameters. This framework can now also be applied to other DM models, like warm dark matter.

Emulators are an ML-based model for predicting the output of simulations. Gaussian processes provide a powerful emulator model, probabilistically interpolating between an efficiently-sampled training set of simulations. I worked in teams developing an emulator for cosmological analyses using the Lyman-alpha forest. This is targeted towards realising competitive constraints on extended cosmological models in next-generation Lyman-alpha forest surveys like the Dark Energy Spectroscopic Instrument.

In particular, I worked on applying active learning to constructing emulators for cosmological analyses. This entails iteratively building up the training set, maximising a combination of sampling high posterior probability parameter space and reducing uncertainty in the emulator prediction. This leads to two major advantages. Tests of convergence in parameter inference with respect to the emulator model can be carried out. Further, it makes the use of emulators feasible in high-dimensional physical models by efficient sampling of parameter space. This is very important for large-scale structure studies, where forward modelling is computationally expensive and there are many free parameters.

A limiting factor in measuring the primordial inflationary tensor modes in the CMB is contamination from polarised dust emission in the Milky Way. I studied the problem of removing this contamination using a signal processing technique called spin-directional wavelets. These were able for the first time to exploit morphological information in the filamentary structure of dust emission to improve the reconstruction of the primordial signal. This can help to achieve the goal of improving the tensor-to-scalar mode ratio and neutrino mass sensitivities in next-generation, higher S/N CMB experiments like the Simons Observatory and CMB-S4. You can find more details and the cleaned Planck data products here.

High-density absorbers in the IGM

High column density (HCD) hydrogen absorption, if incorrectly modelled, can bias our inference on cosmological parameters using the Lyman-alpha forest. I developed a model to mitigate this effect using the Illustris cosmological hydrodynamical simulation. The model accounts for the modification to the column density distribution function caused by the process of pre-screening the most prominent absorbers in quasar spectra. It has been used to check for HCD contamination in the latest (e)BOSS analyses of both the 1D power spectrum and 3D correlation function of the Lyman-alpha forest flux.